An unique and exciting tour of Bergen’s most stunning scenery and a journey back in time to the golden age of travel with boat, train and bus. 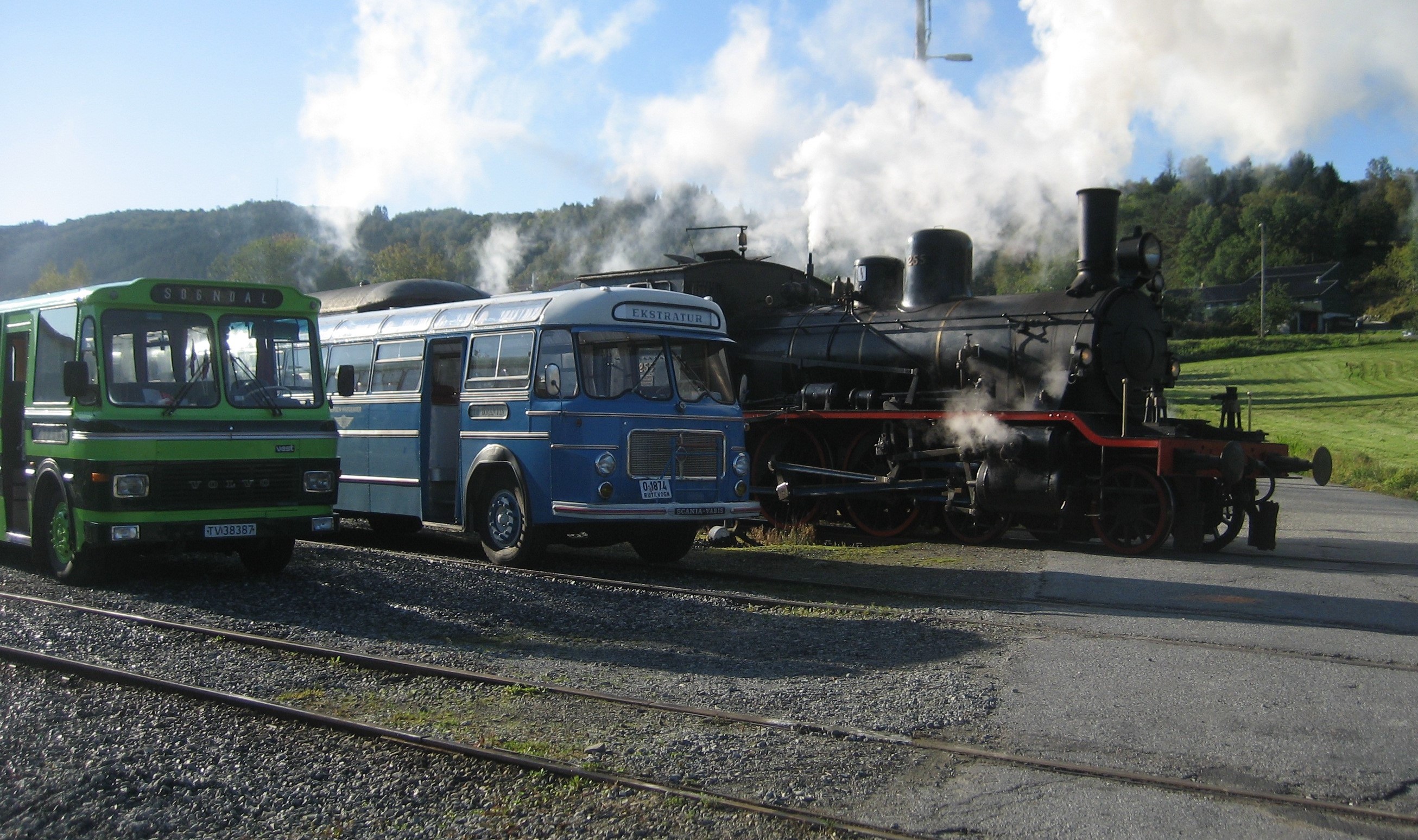 The steamship “Stord I” was built for Hardanger Sunnhordlandske Dampskipsselskap at Laxevaag Maskin & Jernskipsbyggeri in 1913, and was in service for the company until 1969. It was restored between 1981 and 2013.

The steam locomotive type 18c, no. 255, was built in Norway in 1913 for service on the line on the Eidsvold- Otta-line. It continued to serve NSB on several lines until 1969 when it was decommissioned. It was restored by volunteers between 1981 and 1992.

The first of the buses that operate on the roundtrip was delivered in 1962 to Bergen Hardanger Billag. The bus went into service in the Bergen area and corresponded with local train services to Garnes and Voss. The second bus was delivered to Sogn Billag in 1979 and transported passengers from Vik i Sogn to the train in Voss. Veteranbusslaget acquired the first bus in 1992, the other one in 2005.

A Roundtrip including the veteranship “Stord 1”, the heritage steamtrain “Gamle Vossebanen” and heritage buses. When leaving the harbour of Bergen with “Stord 1”, you will enjoy the view of “the city between seven mountains” as Bergen is called. From the ship you will also see cultural heritage places such as Bryggen and the Coastal heritage center in Sandviken and the Funicular climbing up to Fløyen. During the voyage you can see how Bergen has developed and expanded along the fjord with industries and homes.

The landscape gradually changes from the urban city to typical western Norway fjord landscape connected by bridges, such as the Askøy bridge to the west and the Nordhordaland bridge to the north. The steamboat “Stord 1” is a typical coastal ferry that used to transport passengers and freight. The boat is just the same as it used to be when operated on a scheduled route, it still has many salons and plenty of space on several decks. During the voyage you can enjoy the entire boat by paying a visit to the wheelhouse, engineroom and the galley. In the galley you can buy traditional stews, soups, pancakes, waffles and beverages such as tea, coffee, mineralwater, beer and wine. 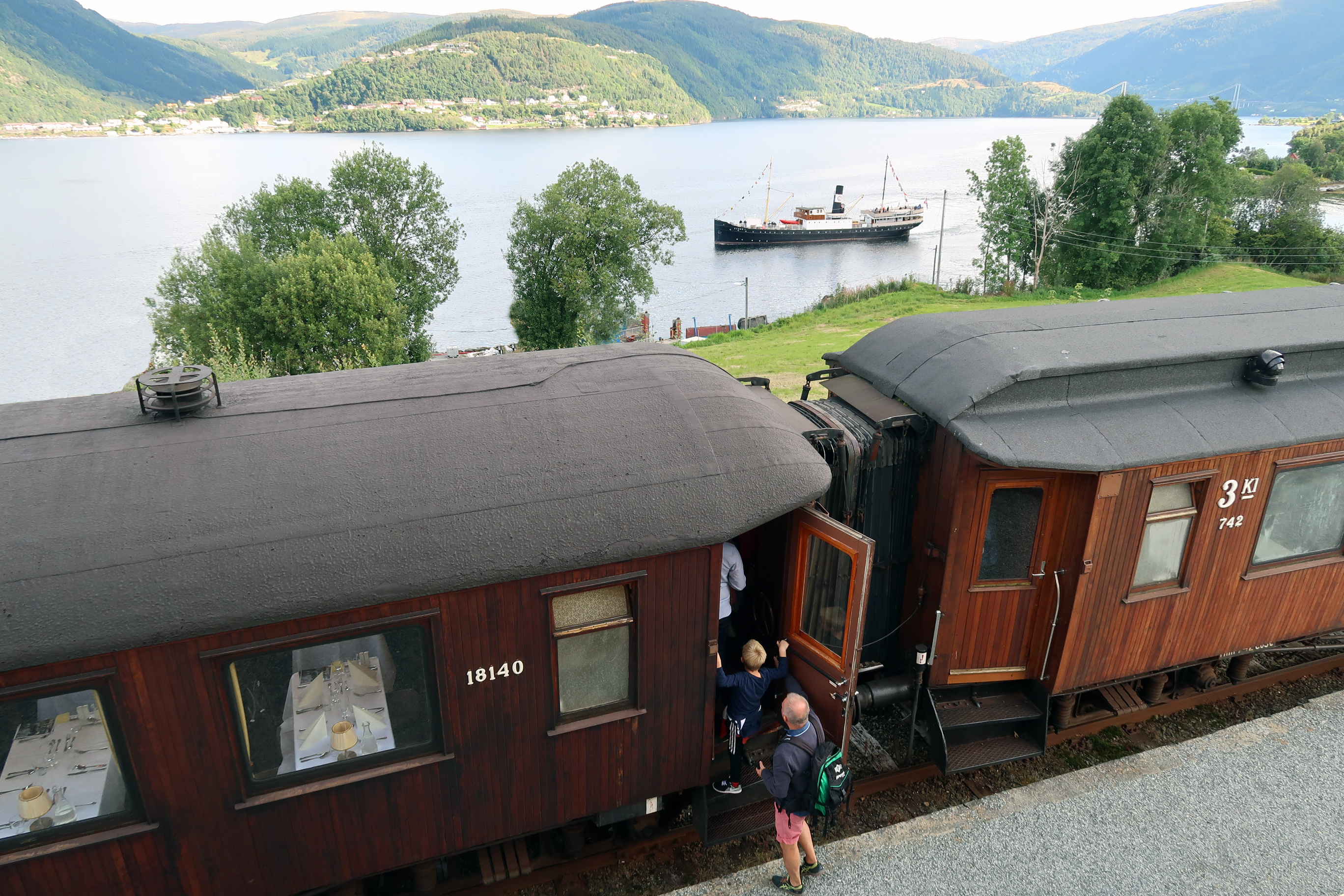 Enjoy the ride on a genuine steam railway. After a short stroll from “Stord 1” by the quay at Garnes, you enters the steamtrain on the old Voss railway, a unique fjord railway. The genuine steam locomotive was built in 1913 at Hamar (a city on the eastern part of Norway ) and has teak carridges from the 1920’s and 1930’s. During the trainride you will enjoy beautiful sceneries while the train goes along the fjord with sea and water on the one side of the train and steep mountainsides on the other. The trainride is 18 kilometers long and takes you from Garnes to Midttun. Sit down, relax and enjoy the view while the train roles through the landscape. At Midttun station the heritage buses will take you back to the city center.

The bus tour. The heritage buses will take you from Midttun Station. The tour will go through suburban areas of the city such as Nesttun, Paradis, Storetvedt, Landås and Kalfaret with good views towards Damsgaard at the western part of the city. You will pass the “Stadsport” a tollgate built in 1628 and then continues along the harbour to the final stop at the Holberg quayside.

If the first leg of the tour is with the heritage bus, you will have the oportunity to stand at the quayside and view “Stord 1” maneuver its way out of the harbour before heading out towards the fjords. The bus will then take you to Nordnes where you will pass the Aquarium, and then continue to the city center passing the theatre , “the city park”, “Festplassen” and “little Lungegårds lake”. Continuing onwards past the fishmarket and driving through Kong Oscars street, the residential area of Kalfaret and the city suburbs of Landås, Storetveit, Paradis and Nesttun stopping at Midttun station where the veteran train awaits.