The Old Voss Line (Norwegian: Gamle Vossebanen) is a heritage railway between Garnes and Midtun near the second largest city in Norway: Bergen. Originally constructed as the first part of the Bergen - Oslo main line, it opened in 1883 as part of a narrow gauge line from Bergen to Voss. Following the decision to complete the railway to Oslo as standard gauge, the line was upgraded to standard gauge in 1904. Electrified in 1954, it continued to serve as part of the Bergen - Oslo main line until two new tunnels in 1964 made a 30 km huge “S”-shaped line around the mountains obsolete. The museum line is part of this piece of railway. 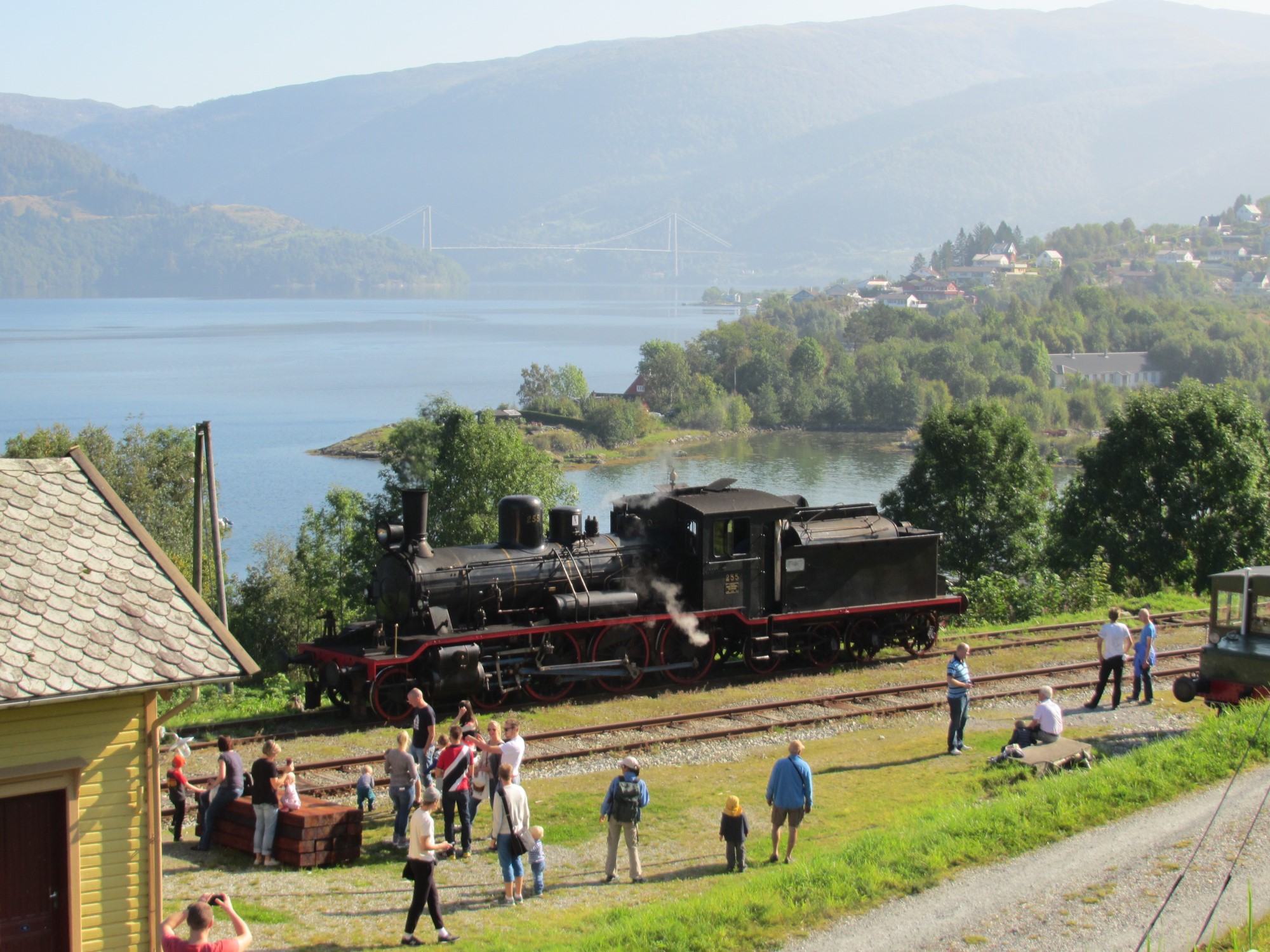 Even if the line is a former main line, it has narrow curves. Maximum speed was 70 km/h. The services running here were local trains between Bergen and Garnes, local trains Bergen to Voss, the express trains Bergen – Oslo and freight trains. After 1964, only few freight trains were run, shunting wagons to several industrial companies. Electrification was torn down after 1964.

The steam trains started in 1993 and have run every year since then. Normal scheduled traffic is on Sundays from middle of June to middle of September. Charter trains and work trains are extra. Between Midtun and Bergen, most of the line has been removed. On the other side, east of Garnes, the line is connected to today’s main line Bergen – Oslo.

Today, the museum railway is operated by the voluntarily Norwegian Railway Association (Norsk Jernbaneklubb) and runs on Sundays between June and September. The length of the museum line is 18 km between Garnes and Midtun stations. The Midtun terminus is located near Nesttun, and there are further intermediate stops at Arna, Espeland and Haukeland stations. The service operates with a type 18c steam locomotive, no. 255, built in Norway in 1913, decommissioned in 1969 and restored by volunteers between 1981 and 1992. It pulls a train of teak carriages built between 1921 and 1938. The locomotive is stored at the restored Garnes station that features a museum, engine shed, yard and turntable.

Foreign railway enthusiasts can have a look at our restoration work by coming to Garnes on a Tuesday in the evening after 18:00. Most repair on our cars is going on in the car hall at Seimsmark. This is about ten minutes’ walk from Arna station onwards to Garnes. During summer, people will be at Garnes station on Saturday evening too. We fire up and prepare our steam engine. People will usually also be there on Sunday mornings.

The museum line first leads through the garden city of Arna with the fjord below. After Arna it rises sharply towards Haukeland station. It follows the Arna river, the only river with salmon in Bergen, then reaches the agricultural plains around Haukeland. This was the highest station between Bergen and Voss before. During the war, German soldiers checked passengers at Haukeland. After Haukeland, the landscape changes, the line passes several lakes (Haukelandsvannet, Søylenvannet and Grimevannet) as well as five tunnels. The line follows lake Grimevannet and the river down to Midtun station.

The line shows how railways were built in different periods. The very first built part is near Grimevannet, built before 1883. During reconstruction in 1909, several curves have been rebuilt with a greater radius, but even now some curves have a radius of only 250m. It can also be observed how the original tunnels have been widened to include electric wiring.

The steam engine was originally designed to pull the trains between Bergen and Oslo. However, due to much larger traffic than expected, these engines were soon too weak to serve the main trains. First, they ran double traction, but then larger steam engines (types 26 and 31) replaced them, and the engines served at other lines. Our engine ran on the line between Grong and Namsos for most of its life. It was built in 1913, part of the third series of such engines, using overheated steam. It has 12 tons axle load, is a 4-6-0 and yields about 800 HP. We had to replace its boiler in 2008. The new boiler is a welded one built by Meiningen works in Germany, but built to original specifications. The engine has a compressor and equipment for air brakes. This was fitted during the 1930s. This steam engine has reliably served the trains though all the years.

For shunting at Garnes we use historical diesel tractors. Such engines were placed nearly at every station where small scale shunting had to be done. Both diesel tractors are in their original shape from the 1930s and 1950s. The passenger cars have steel frames and wooden bodies. This type of cars was operational in Norway until the late 1970s. The interior is like it was in the 1950s. They are marked as ”third class” as used before World War II.